The story of David is a memorable one—a well known character in biblical narratives and a “man of God’s own heart” who commits remarkably unethical acts while in a position of power. It’s also a familiar story that reads like a House of Cards script.

Faith and politics is, indeed, a curious topic. King Saul is an early account of this volatility, and Jesus himself was the victim of a political execution. Last night, we explored themes surrounding faith and politics during Belmont’s Faith and Justice week. Panelists included (pictured left to right): Rev. Warner Durnell, Executive Presbyter of the Presbytery of Middle Tennessee, Rev. Stacy Rector, Executive Director of Tennesseans for Alternatives to the Death Penalty, and two students we admire for their activism, Katherine Heidecke, who interned for Senator Durbin, and Lauren Borders, who has worked on multiple local issues in both parties. The panel moderator was Michael Cuppett (author), Belmont’s current president of UKirk.

The notion of “faith and politics” can be problematic. On one hand, it’s often uncomfortable for our ministers and churches to be explicitly political; however, all our panelists brought a case for faith and political integration. As we see in Jesus, to be faithful is to be political—it’s impossible to divorce one’s central mission, values, and philosophies from public policy. In the words of Belmont professor, Dr. David Dark, “policy is liturgy”. As one panelist pointed out, Jesus wasn’t crucified for advocating or organizing for or against a Caesar, but for a ministry that was antithetical to the systems and institutions of the day. Christ was incompatible with an imperialist civilization.

Jesus walked the lines between prophetic truth-telling, influential rhetoric, and loving respect. In a country where the words “white supremacist,” “alt-right,” “snowflake,” are cannon fodder, it’s a difficult line to walk. Quite possibly, it boils down to compassion, as many of our panelists pointed out. It’s not entirely about reaching across the aisle, but rather about opening dialogue with generosity. Seeing the environments and heritage individuals have dwelled in can be a major piece of the puzzle.

Extending compassion to those who do not extend the same is often draining, particularly for those of us

who can’t see ourselves as “issues” but need to be regarded as people, too. Caring for one’s own mental and emotional health is extremely important. All our panelists agreed that spiritual disciplines like prayer and seeking comfort and accountability in community are essential, particularly for faith-informed politics; but important self-care practices can also be found in long walks and yoga and sororities, and the like, not just the sacred spaces of chapels and churches.

In all this, our panel continued coming to a theme: political action is often small and seemingly insignificant. One conversation or discussion can effect change. A retweet is certainly not equivalent to a call to your senator, and a like on Facebook is not the same as a conversation with your neighbor. It begins with small, practical, ordinary, yet also intentional steps. Each of us is wonderfully made and uniquely informed, and have experiences that influence politics. Engaging with our representatives, our leaders, and our faith tradition brings a world of questions; yet we also engage with the Kingdom of God.

More to think about: Can the church in America be a voice for the marginalized and minorities as an affluent political power? What values do you incorporate into your political theology? How does your understanding of God, Jesus, and/or ethics influence your politics? 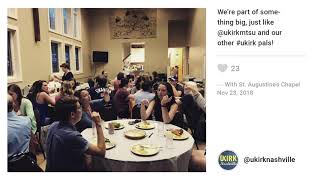